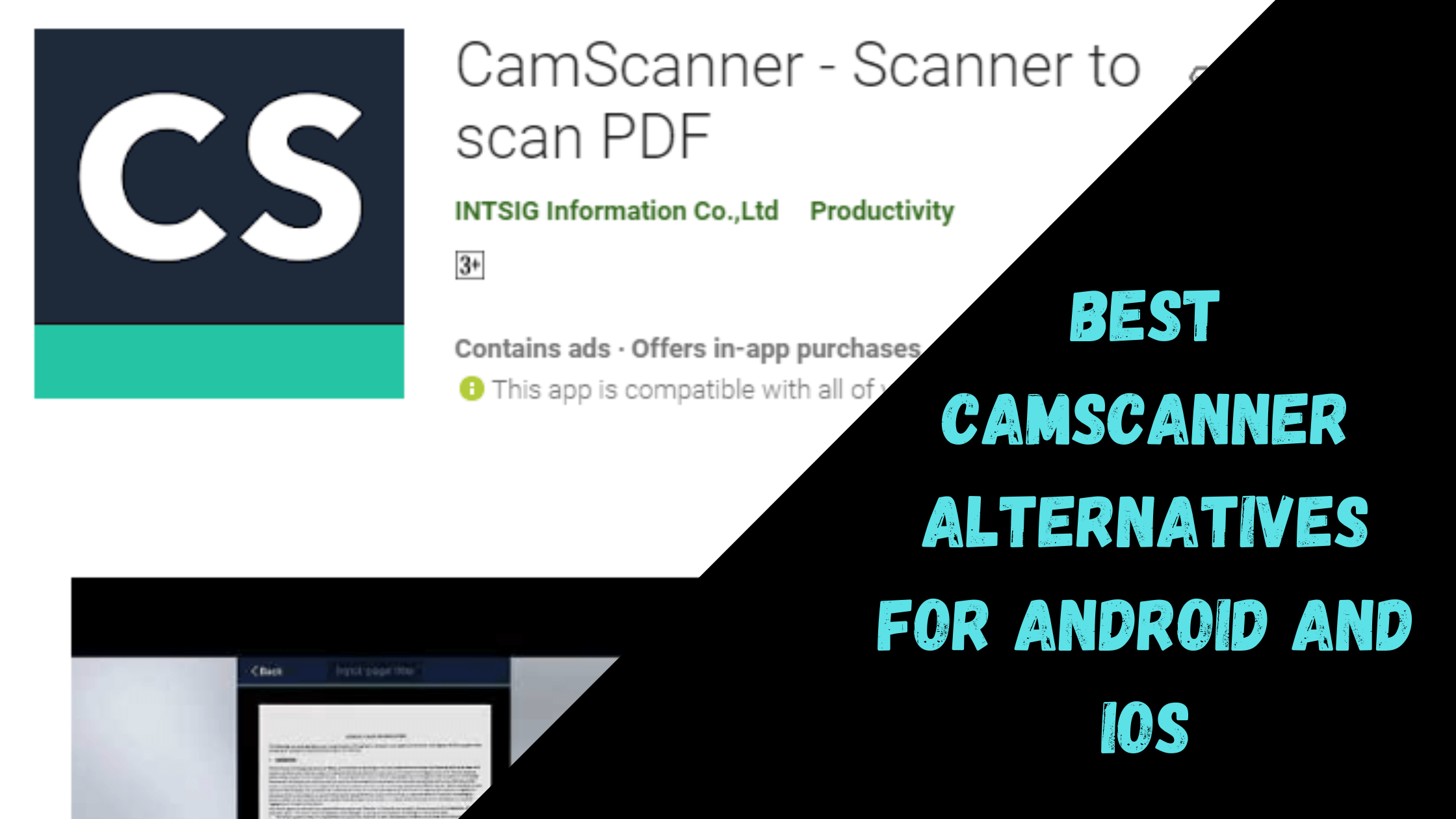 Are you searching for CamScanner Alternatives? CamScanner is a very popular document scanning application. Recently CamScanner is banned in many countries due to malicious backend spying features. If you need a CamScanner replacement, I have shared the list of some similar apps like CamScanner.

There are many document scanner app available for android and iOS smartphones. But not all are good and having features as compared to camscanner. I have compiled a list of the best CamScanner alternative apps for you. All the below apps are created by genuine developers without having any suspicious history. So read this article until last to know more.

CamScanner is a popular app for scanning documents developed by Chinese Company Instig. It was used by millions of smartphone users to scan paper documents for free. This app has both premium and free version. Besides scanning, it allows users to export scanned documents in many formats likes PDF, JPED, Docx, and png.

CamScanner also has OCR – Optical character recognition feature that extracts texts from images. Apart from this, It provides 10 GB cloud storage where you can upload your scanned document for free. But recently it is banned in many countries because of suspicious spying user data in the backend.

Well in past Camscanner was also taken down several times by google from its play store due to malicious malware. And recently Indian security agencies again reported about its suspicious activity. Due to this, it is banned in India and many countries. So do not use this app, you can try other CamScanner replacements to scan your important documents.

Is CamScanner a Chinese app?

Yes, CamScanner is developed by a Chinese company named Instig. Also, it was caught red-handed many times for spying on the user’s personal data without permission.

List of Free Alternatives to CamScanner App For Android and IOS

Below is the list of non-Chinese CamScanner alternatives. These apps are having excellent scanning features similar to Camscanner and available for both android and IOS. Also, all the mentioned apps are free and don’t put a watermark like CamScanner.

Adobe Scan is the best CamScanner Alternatives to scan documents developed by Adobe. It is completely free to use available for both android and iOS. It has almost all the features similar to CamScanner. It automatically recognizes all the scanned documents and crops it using AI. There are also settings where users can enhance the image quality.

The main feature is OCR that extracts texts from the image. Unlike CamScanner it is watermark free means it does not put a watermark on any document. The interface is very simple and easy for all users. Although registration is required to use this platform.

Microsoft Office Lens is a very powerful PDF scanner app that you can use to replace CamScanner. Users can use this app to convert images to PDF, Word, and PowerPoint files. Also, you can save your scanned documents to OneNote, OneDrive, or your local device. It has almost all the other features of camscanner like OCR, batch scanning, and auto-edge detection.

Microsoft Office Lens is also completely secure as it comes with a powerful Microsoft ecosystem. The interface is very neat and clean. Also, there are no ads available like Camscanner.

ScanPro is another one of the non Chinese apps like Camscanner. It uses Scanbot SDK which added more features other than scanning. It has many more features like QR scanner, Lightning fast speed, bar code reader, OCR, and business card mode. ScanPro has edge detection and auto-crop functionality that similar to camscanner level. Users can also search for text in any document using the OCR feature.

Also, it is developed by boul Alexandre which is a Canadian based developer. That’s why it is considered safer than the CamScanner app.

TapScanner is the next best CamScanner Alternatives in this list. It is a free app without any advertisements. TapScanner takes multiple photos of documents and makes a high-quality output. It also comes up with OCR support to convert images to text. The other features like batch scanning and edge detection features are available.

Users can also use the Cloud integration setting to take backup or upload content to the cloud. Apart from this, it has an inbuilt QR Scanner app that can be used to scan QR code details.

Pocket Scanner is another similar Alternatives to CamScanner. It is completely a made in India app developed by Incisiveisoft company. This is a completely free app, but it contains ads to support developers. It allows users to scan documents in may formats. Apart from that, You can convert images to texts, edit the scanned documents, export to multiple file formats.

The application size is very small with extremely fast processing speed. Ther interface is also designed according to the user’s needs. If you are from India and CamScanned is banned, then definitely it is a best option for you.

Google Drive does not have power-packed features as compared to CamScanner. Google Drive is a basic Document scanner app that allows users to scan and upload images. It also offers edge detection and crop functionality similar to camscanner. It is owned by google so do not worry about the security issues. To scan document users need to tap plus button and scan documents.

Also, Google Drive is pre-installed in almost all smartphones. This is the reason why I chose this as camscanner alternative app. Besides these, batch scanning and OCR detection features are missing from this.

PhotoScan is a popular scanner app developed by Google. It is basically a photo-centric app. It uses an AI processing algorithm to build high-quality output. You can use this app to digitalize your old photos in high-quality resolution. But you can also use PhotoScan app to scan your documents very easily.

Also, it comes with auto edge detection, glare-free and cropping features. While the OCR and batch scanning mode is missing from this app. The interface is very simple, even a kid can use this app very easily.

This is one of the Best CamScanner alternatives. Fast Scanner is one of the old apps that is available even before the development of Camscanner. It is developed by a Vietnam based company CoolMobileSolution. Fast Scanner is a 100 percent free app available for smartphone users. It does not require any suspicious activity permissions like CamScanner. But it does not have OCR features like other apps. Although users can use auto edge detection, easy export feature, multiple scan mode features easily.

The size of this app is very small as compared to others. Also, its service speed is very fast than CaamScanner.

Notebloc is another popular free document scanner app available for smartphone users. It is developed by the Notebloc company which is based in Spain. Notebloc is very much similar in features provided by camscanner. This is a very fast, small in size, and safe app to use. It also has an OCR feature that helps users to extract text from images.

The interface is also very simple and easy. Users can also edit scanned documents using this app. Apart from this, It also allows users to sync documents to google drive very easily.

Doc Scanner is another PDF document scanner app from android users. This is an Indian alternative of Camscanner app. It is completely made by Indian developers. Doc Scanner provides a complete scanning feature while OCR is missing. The user does not extract text from the images. The document edges are automatically detected which makes you easy to crop it.

However, the app interface is very simple as compared to the cam scanner. Users can easily scan the document and Share PDF/JPEG files with others. It also provides the facility to print or fax the scanned doc directly from the app.

That’s it for this article. All these apps are quite similar features and interfaces like CamScanner. You can use these apps to scan your documents using your smartphone and save it. Adobe Scan and Microsoft Office Lens are the two most similar apps like CamScanner. I am sure you won’t be disappointed. If you found this article useful then don’t forget to bookmark this URL for future purposes. I will update this list with a new one soon.

I hope you will like this article on Best CamScanner alternatives. Let me know which is your favorite document scanner app in the comment box. Don’t forget to share this article with your friends and relatives.

Piyush Kumar is a passionate blogger and web developer. He is the Admin of Geekyduniya and loves to write about tech content.